The entire social media is as you read this on fire following a shocking revelation that the #SaveMayowa Campaign which involved raising money for cancer patient, Mayowa Ahmed, with actress Toyin Aimakhu as the face and voice was a scam!

The story wouldn’t have gotten the attention we are giving it but for the video of Toyin Aimakhu, who we learnt is still in shock, which surfaced some hours ago, with Police officers in sight at LUTH where Mayowa is on admission.

According to what we learnt, Mayowa’s family allegedly used the poor lady to scam well meaning Nigerians who helped her raise over 30 Million Naira in 48hrs despite knowing that her condition was beyond finicial help.

Mayowa’s family have released a statement insisting it’s no scam and that they are truly taking her abroad for medical treatment tomorrow.

In their new statement, they said they are taking her to a hospital in Abu Dhabi but when they started raising money for her, they said they wanted to take her to Emory hospital, Atlanta, who had given them a quote of $100k. Meanwhile some or Mayowa’s family members are as you read this in Idibia Oro Police Station Mushin where are they are currently being detained. Read their statement below 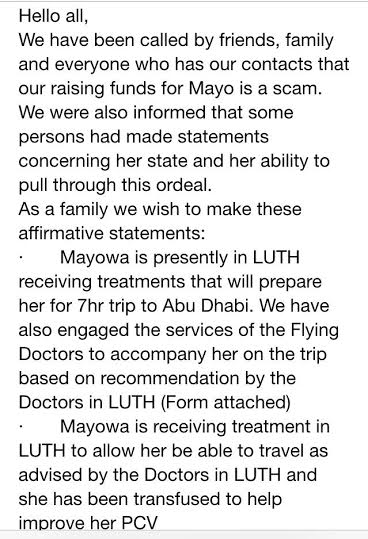 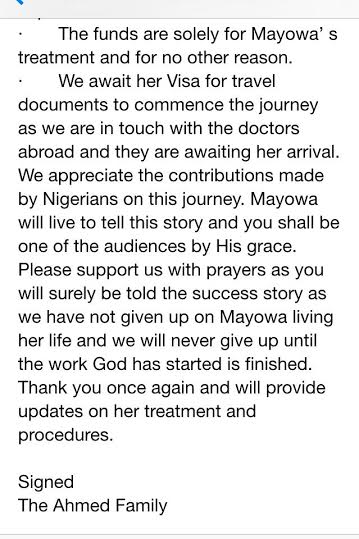 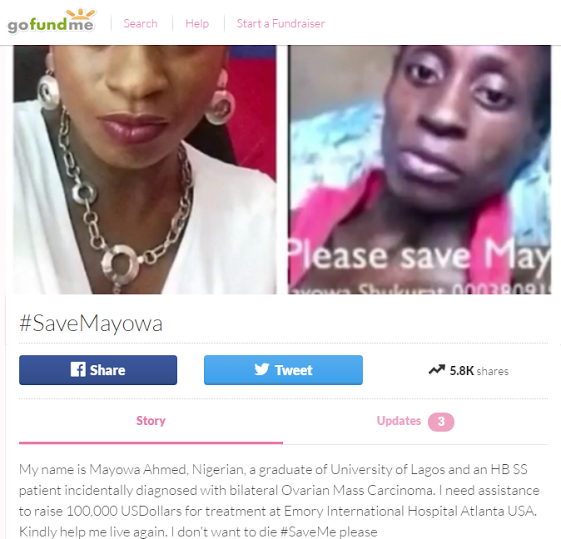 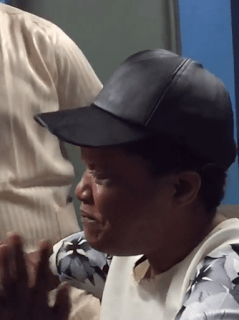 About Faith Irabor 1041 Articles
Welcome on board!!! Faith Irabor is just like your everyday girl next door with strong survival instincts. Am an International Journalist, Events planner and Blogger whose media journey dates back to June 2002 as a TV presenter with the Nigerian Television Authority (NTA) Ile-Ife Osun State while I was having my National Diploma in Mass Communication. I left NTA in 2005 to pursue my B.SC in Mass Communication at the Olabisi Onabanjo University OOU Ago-Iwoye, Ogun State and finished in 2008 before joining one of Nigeria's best investigative Tabloids (National Enquirer Magazine & www.enquirermag.blogspot.com). I am very privileged to be trained by one of the industry's bests, my boss and mentor Mr. Tunde Moshood Jr, the former Editor of the defunct Fame Magazine, Publisher of National Enquirer and president Miss Global Nigeria who taught me everything I know in Journalism especially the investigative aspect which is the fulfilment of being a member of the Fourth Estate of Realm (as we journalists are usually officially addressed). My desire to take my journalism practice beyond the Newspaper & Magazine came from the passion I have derived over the years from investigative journalism as Online Media is the best platform to tell a story or news the very minute it’s at your disposal without wasting time. I promise to serve you nothing but exclusive and interesting news, interviews, events, articles from around the world and please feel free to email me on faith.irabor@faithirabor.com on spotted errors as well as ideas that would make me do better as there is no perfect being anywhere except God. Now scroll up, click on any of the stories and please drop your comment!!!!
Contact: Website Facebook Twitter